Hello, Internet, today is Tuesday, March 1st, and yesterday, we started our tour by driving ourselves out to Bay Roberts for our first show. It was an early start to the day, since we wanted to give ourselves enough time to sort out how all the pieces went together before a 12:30 show.

Red sky in morning… time to drive to Bay Roberts!

After a brief stop at Tim Horton’s for some much-needed coffee and bagels, we loaded into Ascension Collegiate’s gym. Our stage manager’s partner in crime and theatre, Brian, came along to be our in-case-anything-goes-wrong-on-the-first-go-technical-genius, and we had a dozen or so awesome student volunteers.

(Turns out that Brian is something of a photographic genius, too, so that’s lucky.)

A look from backstage at the halfway mark.

In addition to the extremely pack-able set (more on that tomorrow!), doing the show in a school gym basically means that we need to turn the space into a theatre, so school shows involve setting up a screen & projector, curtains, speakers, lights, and all the cables required to hold it all together, plus chairs.

400 chairs! And then, although I didn’t take a picture of it (and generally I won’t be taking pictures of the audience), every one of those chairs was filled with a high school student. And a few extras were brought in. And about 30 teachers were standing in the room as well. It was a pretty spectacular thing to see.

It must also be noted that our school liaison personally baked us cookies and delivered them to us before the show, along with some healthy snacks, thus endearing herself to us forever and setting a high standard for our future venues *cough* to meet *cough we like the smarties cookies best cough cough*. 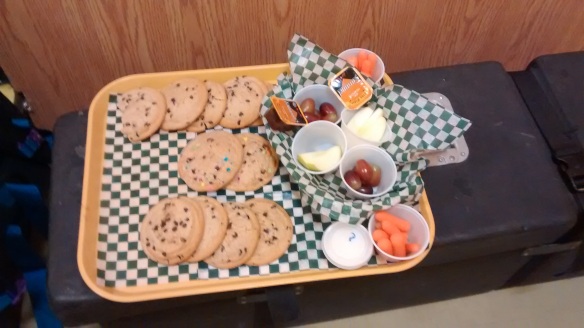 I didn’t get to take a picture before many of the snacks were eaten.

A couple of members of Ascension’s Social Justice Club introduced the show, and it was great to see them speak. Laura and Evan did a lovely job, Crystal ran the show in front of people for the first time and nailed it, and we had a few questions afterwards. Evan spoke about the research he did preparing for the role, and we had a bit of a talk about the onset of mental illness and the importance of opening up the conversation. At the end of the show, two more Social Justice members got up to thank us, and one of them told this story:

She had seen Give Me Back at the Mental Health Matters conference at Holy Heart of Mary in April, and after the show, one of the other delegates told her how much the play had affected her; she said it made her feel like she wasn’t alone.

We packed up the van – with loads of help from some very kind and patient student volunteers – and headed back to St. John’s for the night looking forward to the coming weeks. Another night in our own beds, and then… to Labrador!

This site uses Akismet to reduce spam. Learn how your comment data is processed.